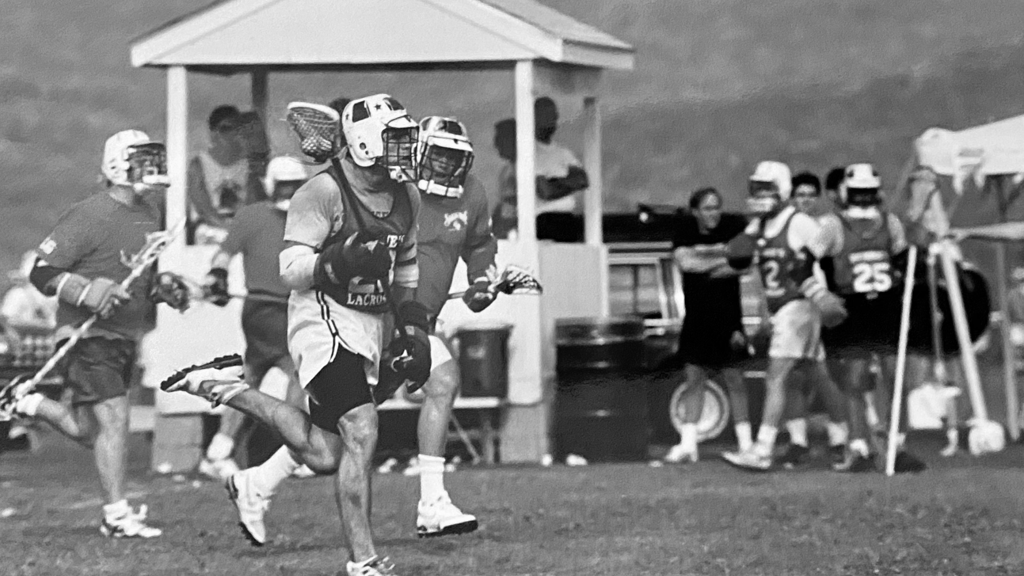 Tim Schurr is on the move in transition

Thirty four teams from the U.S. and Canada journeyed to Lake Placid, New York, August 11-14 for the sixth annual Summit Lacrosse Tournament. After more than 73 games in three divisions of competition, the Sailin' Shoe L.C. maintained its near perfect tournament record as its entries won the Invitational and Masters divisions. The only division the Shoe did not win was the inaugural Club division which was won by Connecticut's Chief Dawgs. Of course, the Shoe didn't field a team in the Club division.

Behind stellar play from Rich Barnes, later named Invitational Division MVP, the experienced Shoe fought back from being down 6-4, using a 6-1 third quarter to defeat the New England Knights 11-8.

The Shoe's Masters entry won their third straight championship in relatively easy fashion; their closest margin of victory being 7 goals in their opening round win over the Long Island Remnants. Led by legendary players like Bob Griebe, Brendan Schneck, Joe Gold and Jeff Long, this team has proven to be in a class by itself.

​​​​​​​Due to the rapid growth of the tournament a new division of competition, the Club division, was introduced in 1995. The Chief Dawgs, featuring players from Springfield College took the title by virtue of its 14-8 victory over Fulton. The Dawgs were lead by division MVP Sean Quirk in goal. In winning the Club division, the Dawgs earned themselves the right to an automatic bid in the Invitational division of the 1996 tournament.