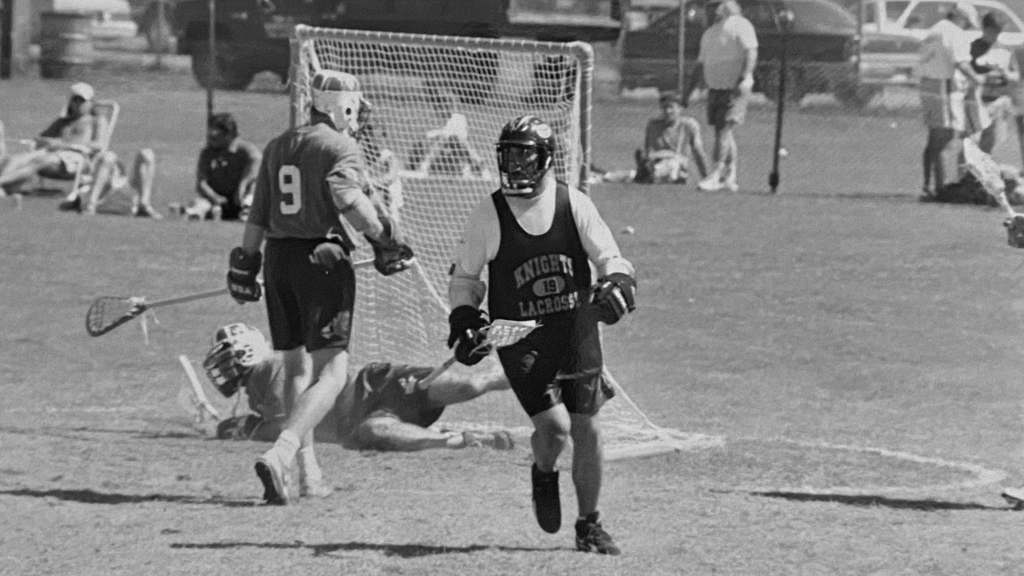 Just as it was looking like another Shoe victory and title, Gait and Lockwood kicked the Knights into high gear. Each scored two goals during a seven goal rally culminating with a Lockwood blast tying the game with twenty seconds remaining in regulation. In the first overtime, the Shoe put incredible pressure on the Knights cage but Jason Gephardt, later named top goaltender in the tournament, stopped everything thrown his way. At the other end, Gait cranked a cannon shot off the pipe and Steve Scaramuzzino's behind the back shot just missed in the closing seconds of the first overtime. With less than a minute gone in the second overtime, Lockwood's speed and hustle got him into position for a sharp angle "laser" which he buried into the corner of the net giving the Knights their first Summit championship. Lockwood's outstanding work up and down the field earned him the Division I MVP award.

In the 14 team Masters Division, Sailin' Shoe extended its tournament record to 16-0 and strengthened its claim to be the best Masters team in the world. The Shoe's only challenge occurred in its semi-final game against the Iroquois Nationals who goalie Travis Solomon rep them close in an 11-8 Shoe win.

The 8 team Division II had a real international flavor with two Canadian teams and the Boardman Bulldogs from England joining five American clubs. For the first time, no U.S. clubs were playing in a divisional championship game. The Hamilton Lakers faced the Boardman Bulldogs in the championship game which stay close until the third period when Hamilton's depth prevailed and propelled them to a comfortable 11-5 win behind Mike French's three goals. Hamilton's goaltender Ted Sawicki was a standout throughout the tournament and was named the MVP of the division.