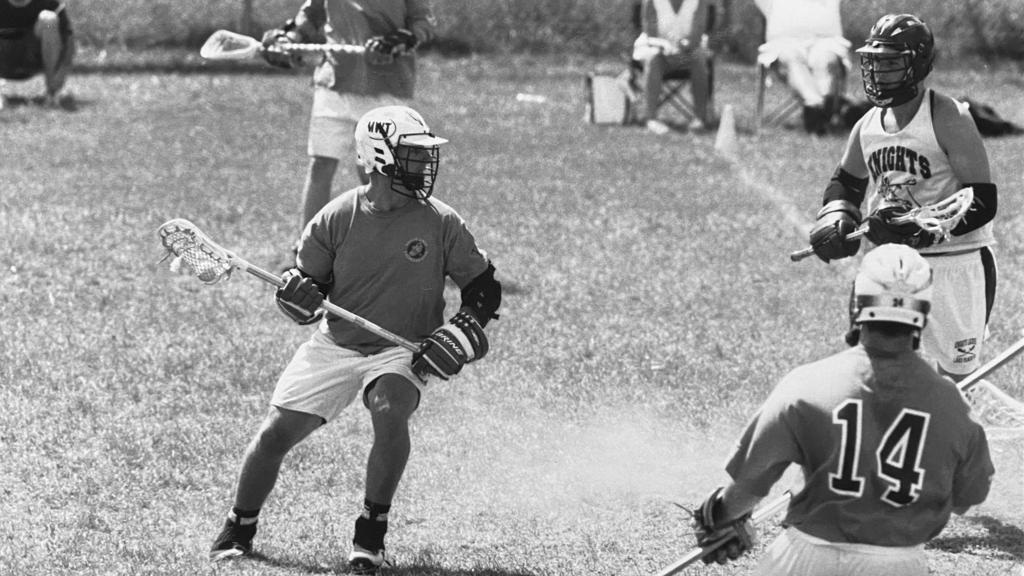 TIm Soudan contemplates his next move...probably a shot! 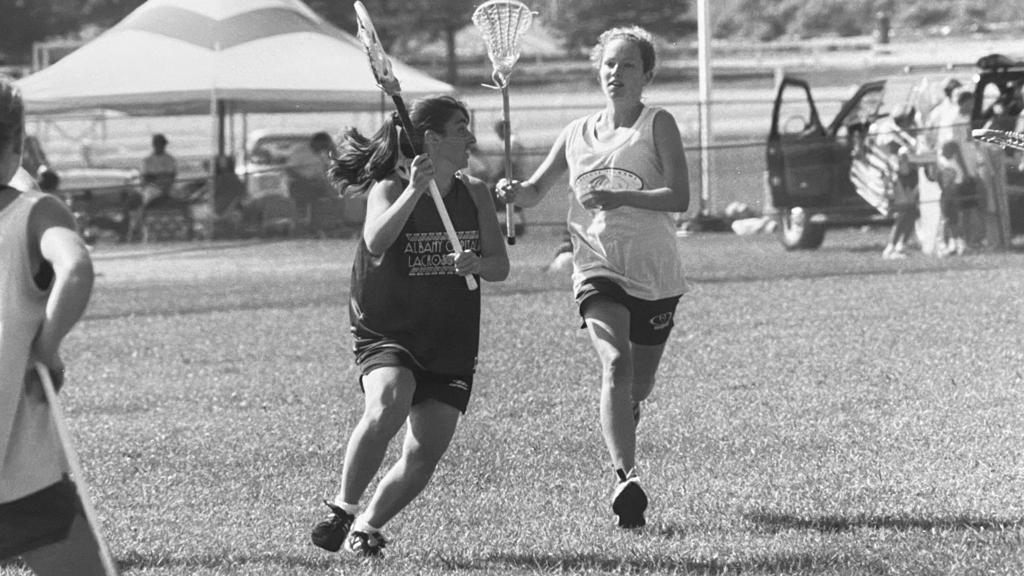 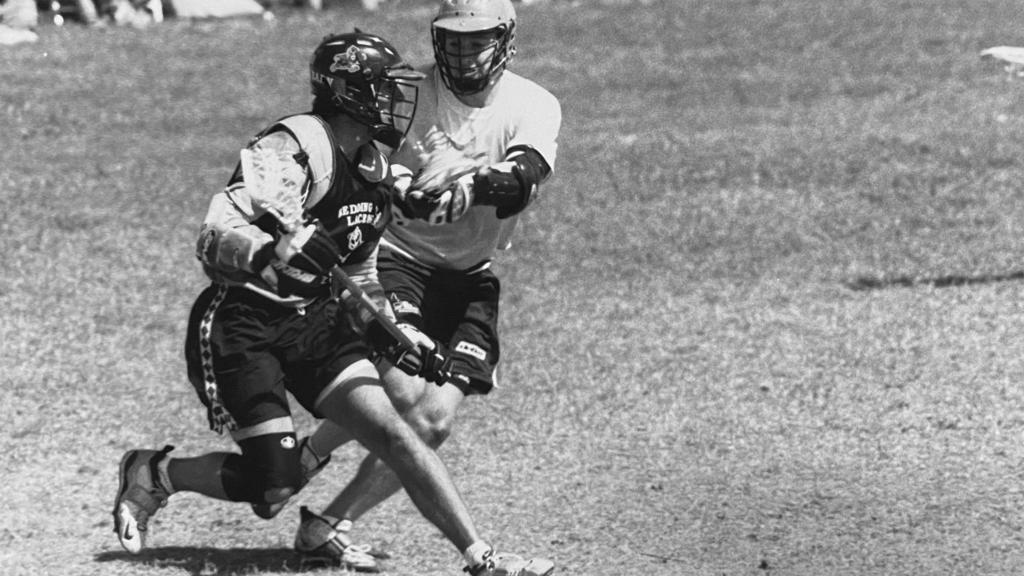 Randy Fraser was hard to stop at the 1999 event

Fierce thunderstorms on opening day were a fitting portend of the furious action that would take place over the next few days. The tenth anniversary of the Summit featured a number of "firsts" including most divisions; 5; most teams; 66; most games; 132; most first time champions; 5; the first ever Grand Masters competition; the first ever loss by the Sailin' Shoe Masters (27-1 over seven years); and the first ever championship by a Long Island team (Long Island All-Stars in Division I). Although the storms would not return for the rest of the weekend, the sunny and warm conditions didn't prove to be as good for "Sailin" as in previous years.

In the STX Men's Division I, the deepest field of competitors to ever assemble in Lake Placid joined seven-time champions Sailin' Shoe. Led by Casey Powell, Tim Soudan, Gerry Byrne and Jim Gonnella, the Shoe's nine-year championship game came to an abrupt halt in the semi-finals. Attackmen Darren Low (4-1) and Dan Denihan (1-3) along with Jim Mule's 18 saves led Long Island to a convincing 13-10 win of the Shoe. The other semi-final saw '96 champion New England Knights jump out to a 6-1 first quarter lead over '98 runner-up Team Bedding Barn. Barn middie Randy Fraser's four goals fueled a furious rally capped by Bill Edell's last minute tying goal sending the game into overtime. Kept relatively quiet most of the game, the Barn's Ryan Powell buried a "behind the hip" shot in the first minute of overtime to close out an exciting 12-11 Bedding Barn comeback win. The championship game was a display of Long Island's depth up and down the field wearing down Bedding Barn. And, when the Barn did penetrate, division MVP Mule was acrobatic in goal thwarting any hope for another Barn comeback. Steve Sombrotto (3-2) joined Lowe (1-4) in leading the way offensively as Long Island surged to an 8-3 halftime lead and never looked back in a convincing 12-7 victory.

The DeBeer Men's Division II belonged to the Eagles, featuring players from Maryland's national high school powerhouse McDonogh School. In this, their second visit to Lake Placid, the Eagles showed maturity and poise in cruising through the division and outscoring their opposition 55-23. Attackman Bobby Benson captured the MVP honors that could have arguably been shared with several teammates including Owen Daly, Matt Primm and Rob Scherr.

The second year DeBeer Women's Division grew to twelve teams with a marked improvement in the quality of play. Tested in the second round by Simeon's (a close 7-5 win), Team Toyota proved to be the class of the field defeating a scrappy Tam Canada Under-19 team 12-8 to take the title. Toyota outscored its opponents 54-17 and was led offensively by Kinsley O'Garrow (8-5) and Anne Heine (8-1), and defensively by Andi O'Connor, Suzy Waire and goalie Trish Dabrowski. Leading the charge for Canada were Shannon Wilson (10-3) and Cheryl Dunford (2-9). Simeon's defeated '98 runner-up Roomers 11-8 to take third place.

The Brine Masters Division has belonged to the Sailin' Shoe since they first entered the division seven years ago. Coming into the '99 tournament with a 24-0 record, the Shoe were favored to repeat. After a closer-than-expected first round game, the Shoe jumped out to a 5-2 halftime lead over Lacrosse Unlimited in the quarterfinals and it appeared to be business as usual. However, a six goal third period by Lacrosse Unlimited catapulted them to a two-goal lead that they never relinquished in a stunning 10-8 upset. In the semi-final round, Team Harley completely shut down Lacrosse Unlimited's championship hopes with a convincing 10-3 win as Hugh MacDonald (4-1) and Paul Denekin (2-2) led the way offensively. The second semi-final featured the 2nd and 3rd seeds, Green Turtle and Atlantic Sportswear. Mark Hahn (3-1) and Gary Hanley (2-1) provided the Turtle with just enough of an offensive edge to give the Turtle a hard fought 10-7 win and set up the first masters championship in seven years that did not include the Sailin' Shoe. The Green Turtle brought a total team effort and jumped out to a 6-1 halftime lead as eight players contributed goals and the Turtle coasted to a 10-6 win.

The first ever Mohawk International Lacrosse Grand Masters Division featured six teams of players age 45 and older. Team Cloudsplitter and Touch of Grey/Maryland emerged from the first three rounds seeded 1 and 2 respectively setting up a championship game rematch of an earlier 10-8 Cloudsplitter win. In a classic defensive battle, Cloudsplitter rallied from a 201 halftime deficit to capture the championship 5-3 behind Tim Donovan's three goals. Cloudsplitter only gave up 17 goals in winning four games with Boo Smith and Al Brown leading a strong close defense in front of goalies Dave Copeland and Art Waugh.