Yocals not so local, but gel as a team anyway 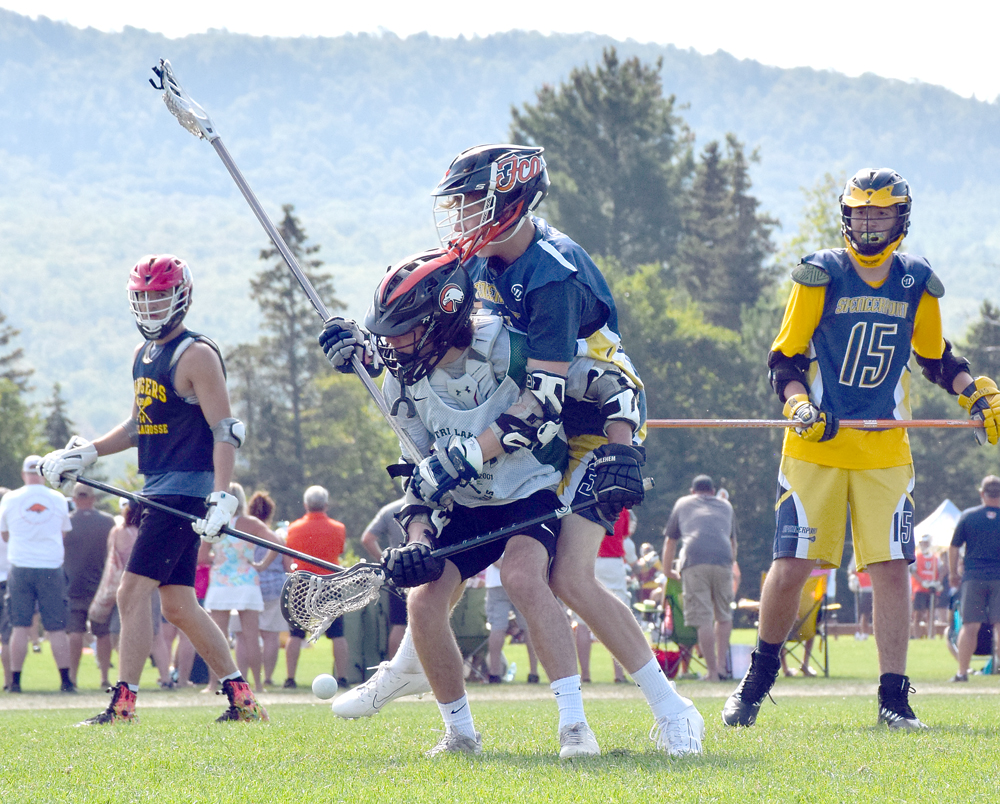 Ben Cardinal, of Albany, shields the ball from a Rangers’ player during the Lake Placid Summit Classic lacrosse tournament on Tuesday. (Enterprise photo — Justin A. Levine)

LAKE PLACID — The Local Yocals under-18 lacrosse team is made up of players from around the state, but even though they start as strangers, the team comes together as the Lake Placid Summit Classic tournament goes on.

Started as a team for players from the villages of Lake Placid, Saranac Lake and Tupper Lake, the Yocals have evolved into the “orphanage” of single players who want to compete in one of the best-known tournaments in the country.

“I think we always have a hard time getting a full team of local kids, so we’ve become like the foster parents or orphanage,” coach Chris Grant said. “We’ve a got a group here from Kingston, we’ve got a group here from Albany and a couple kids from Vermont. So I don’t think by any means we have a home-field advantage. In fact, I think it’s the opposite.

“These kids have never played together … so that first game is kind of a get to know each other, get to feel each other out kind of deal. And as it goes on we get better and better because they begin to work as a unit, but in the beginning it’s really difficult.”

Grant said that after 15 years or so, the team keeps coming together because of the draw and prestige of the Summit Classic.

“It’s just so established and well known,” he said. “It’s one of the biggest and best tournaments in the country; absolutely everybody knows about it. There’s a free-agent board on the website, kids from everywhere. And their parents will play at the end of the week.”

Blake Premo, of Massena, has played on the Local Yocals for the past few years, and echoed Grant’s thoughts on the allure of playing in the Summit Classic.

“I’ve played the past couple years with these guys, now I’m living up here for the summer,” Premo said. “It’s the one tournament that I look forward to every single year. I travel all over the northeast (and) central U.S., and you can’t get a better venue than this.

“You look around and you see all the mountains; all the great people who come here. It’s a once in a lifetime opportunity, and I get to do it every year.”

The Local Yocals were set to be honored by the Summit Classic tournament on Thursday with the Lacrosse All-Stars Grow the Game Award.

The Summit Classic continues at the lacrosse fields and North Elba Show Grounds in Lake Placid through Sunday. For schedules and results, go to www.summitlacrosseventures.com/lpsc.