A Tribute to Jimmy Case

The lacrosse community lost one of its very best recently. Athletic trainer Jim Case, who supported the Cornell University men’s lacrosse team for the past 32 years, traveled with the US National Team for the 1994 and 1998 World Games, and more recently gave his all for the annual Lake Placid Summit Classic and other Summit Lacrosse Ventures events, passed away suddenly on Saturday, March 14.

Jeff Long, the head coach of the Ithaca College men’s lacrosse team, was a longtime friend of Jim’s. He recalls, “What I remember best is how Jim would always be in the exact same spot at The Creeker whenever I’d stop in. Similar to Norm on Cheers – everyone would say his name and he would go right to the bend of the bar, where he had full view of every TV and every person in the place. He felt at home there, like so many of us. And more importantly, everyone felt at home with him.”

“I also recall, though hazily, a road trip he made with Mark Wenham and me to one of the Team USA try outs – can’t remember which year, but it was in Baltimore. Anyways, we spent 13 hours down and back listening only to Grateful Dead bootlegs and partaking in typical road trip activities.  Not sure he was a fan of the band prior to the roadie, but he certainly was by the time we landed back in Ithaca three days later.  To this day, and in the honor of brotherhood, whatever was said and done in that Volvo, stayed in that Volvo!”

Kevin Leveille, Event and Brand Director at Summit Lacrosse Ventures, tells a more recent “Jimmy Case story”: “One of my favorite overlaps with Jimmy is that we had to make the call on hazardous weather together. He would always be very vigilant about tracking storms, and at least once every year in Placid we’d have a moment where you’d see him walking towards HQ with phone in one hand and air horn in the other. It always required a double-take.”

“Of course, the last thing anyone wants when operating or attending an event is hazardous weather. As soon as we blow the air horn, thousands of people have to stop what they’re doing and immediately retreat from where they are back to their cars for safety. Generally speaking, not many smiles to count in that scenario. On the flip side, we obviously want everyone on site to be safe and secure, and it’s our job to maintain that. Jimmy was always on it, looking out for the safety of all.”

“Last year we had a really busy Friday schedule, with probably close to 100 games, plus a World Lacrosse seminar, and the MLL Alumni Game at the end of the day. The plan was to play the MLL game in the new proposed World Lacrosse condensed format, which we would film so WL could use it for research/feedback. In fact, Jim Scherr of World Lacrosse and Steve Stenersen of US Lacrosse had traveled from Canada to participate in the seminar and observe the Alumni Game. About an hour before the start of the game, I looked up to see Jimmy, with his phone in one hand and air horn in the other. Oh boy…”

“Some unfavorable weather had been making its way towards us all day, and it had finally arrived into our sphere. In Placid, it’s always a challenge to read weather patterns, as they often don’t unfold as anticipated with the mountains and winds, etc. There was lightning involved in the cell approaching, which is the primary concern.”

“We tracked and tracked with the hopes that it’d shift away. Knowing that we were so close to getting all games in, it added a little pressure to the situation. Jimmy always understood this balance precisely, and his leadership in these moments was crucial. It wasn’t even raining and, in fact, I believe it was mostly sunny with a few ominous clouds, but Jimmy gave me the look and we set in motion our hazardous weather policy. Horn! Horn! Horn! Groan! (general sound from around the fields). Lightning had struck within our policy limits and the mass evacuation had begun.”

“The lightning continued to strike for the better part of an hour, causing an extended delay. What was brutal was that it maybe rained for a few minutes and the lighting was never within sight. It turned out that we did not finish the day, including the MLL Game. People had been sitting in their cars for an hour and a half only to find out they can now just go home. Needless to say, nobody was thrilled with the scenario, but I knew we had done the right thing for our participants’ safety. I knew that, because Jimmy was always looking out for all of us, and that was never in question.”

I first met Jimmy when I started working at the Cornell Lacrosse Camp, probably around 1990 or so. Back then there were two separate Cornell camp sessions, and there were many summers when I worked both of them. Besides working alongside legend Richie Moran, I loved the welcome I felt from Cornell alumni, assistant coaches, and varsity players – guys like Bobby Rule, Paul Schimoler, John Tillman, Scott Burnam, Anthony Pavone, Keith Reitenbach, Sam Carpenter, and of course, Jim Case.

Jim struck me as not only professional, but also fun-loving. He was the perfect complement to Coach Moran, and when Richie sent some poor camper off to the training room in search of some finniocatine (sp?) powder, Jimmy would play right along, sending the wild-goose-chase victim on to the equipment room, or back to the locker room. Jimmy was also in on the helicopter rides, the ESPN cameras up at the top of Schoellkopf, and every other ruse Coach Moran could muster. The gleam in his eye matched Coach Moran’s any day, and watching their act was better than anything on TV.

I worked at those camps until Coach Moran retired, but I re-visited Cornell to observe practices when Jeff Tambroni, Ben DeLuca, and Matt Kerwick were running the show. Obviously, all the other names had changed – the players, the assistant coaches – but Jimmy Case was still on the scene; he was the one Big Red constant. I loved catching up with him and hearing his stories.

As I started working at the Lake Placid tournament and then other SLV events, I was once again reunited with Jim. His sons were about the same ages as mine, and they both worked the LP score tables with my boys; I talked to Carson about studying at Oswego State and maybe playing lacrosse, and he went on to graduate from Oswego with a degree in technology education and a few years of club lacrosse. I met Jim’s wife Ladeen at Coach Moran’s 80th birthday party and book-signing, and then a few times after that.

As Kevin wrote, Jim was the ever-vigilant, consummate professional at Lake Placid, but he was also quick to smile, and invaluable for the thousands of players who wanted an ankle taped, an ice bag, or just some honest evaluation. Young, old, male, female – Jim was there to make their tournament the best – and safest – experience possible.

We’ll miss him tremendously. Our condolences to Jim’s family and friends. 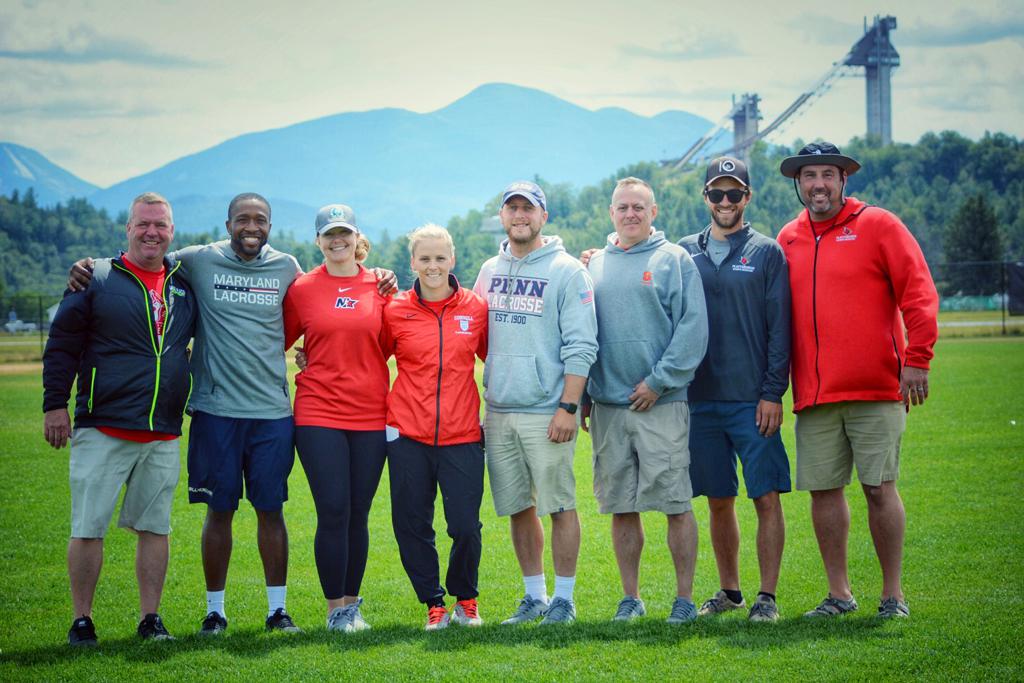