The second Summit Lacrosse Ventures tournament of the summer wrapped up Wednesday, as teams nailed down titles in five divisions in the Lake Placid Youth Classic.

The tournament took place for the second year, and Wednesday provided some exciting action as 40 teams finished three days of games at the scenic North Elba Athletic Fields.

Perhaps one of the most nail-biting and dramatic battles featured the tourney’s youngest players, as Orange Crush eked out a 7-6 victory over the Adirondack Northmen in the championship match of the 2025-2026 division. Cayden Claflin was one of the heroes for the Orange Crush. The third-grader netted the go-ahead goal for his team, and after the Northmen scored to forge a 6-6 deadlock, Claflin bounced home the game-winner while he was falling to the ground with less than a minute left on the clock.

There were 40 teams in the tournament, and Orange Crush, a club from the Syracuse area, fielded seven of those squads. As soon as the youngest Orange Crush team won the match, older players from the team streamed onto the field to celebrate with their buddies. 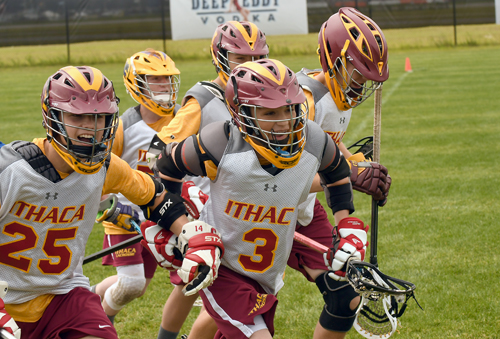 “It’s our first year with this age group,” said Orange Crush coach AJ Claflin. “It’s all about the growth of the game and those older guys building these young guys up. Now they know what it means to win a championship, and hopefully, we can carry that tradition on for the rest of the year and for the rest of their careers.

“We went 5-0, we did well, and we faced great competition,” coach Claflin added. “Hats off to that team Adirondack Northmen. Unbelievable players, unbelievable coaches and they definitely gave us the hardest game in this tournament. It was great — great for the game of lacrosse, a great backdrop, everything’s awesome.”

Claflin, as well as his young players, said the competition was only part of the fun they enjoyed during their three-day tournament run in Lake Placid.

“We went to Mr. Mikes and had a pizza party for the entire team. All seven programs were there, but of course, we had to scatter it. A lot of parents a lot of kids came up here. Between games, we kind of congregated around the fields and just hung out and built that camaraderie among our teams. We do a lot of local stuff in Syracuse, but this was a big trip for us.”

“It was amazing,” added a young Orange Crush player. “This was the first time we are champions with this team. It felt good.” 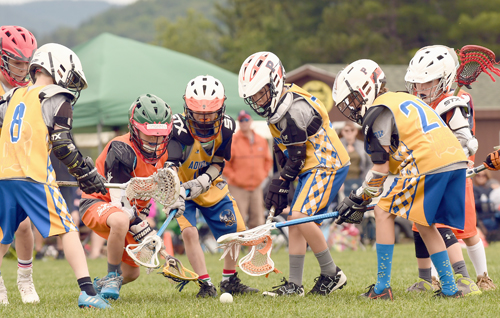 Youngsters from Orange Crush and the Adirondack Northmen battle for a ground ball during action Wednesday. (Enterprise photo — Lou Reuter)

When asked what they enjoyed about there trip to Lake Placid in addition to playing games, another young Orange Crush laxer responded “the mountains, the views, the ski jumps and watching the games.”

When asked how important winning a title was, Cayden Claflin said “It means a lot. It takes a lot to win all those games and get goals and assists.” He said the key to winning is “Pass, communicate and score goals.”

Brian Shelly, coach of the Adirondack Northmen, said his youngsters put up quite a battle.

“We’ve got some second-graders playing on this field,” Shelly said. “Most of the team is third graders, and we have four fourth-graders, and they all played really, really well the last three days. We went 4-1, and in the end we lost to the Crush, but they’re a they’re a very good team. We responded. We were down 4-1 at one point, and we were able to comeback. The kids played great lacrosse and I’m so happy.

“We’ve got kids from Potsdam, Massena, Ogdensburg and Canton, and it will be fun when they get to varsity and start playing against each other,” Shelly added. “This week, some parents were bringing their kids back and forth every day, but we had a group that stayed here and just loved it. It’s a great venue and you couldn’t ask for better turf. It’s perfect right now.”

Another team that took home a championship was Ithaca High School’s modified program. A group of seventh- and eighth-graders, Ithaca made up for a tough trip to Lake Placid a year ago when the team picked up just one victory. On Wednesday, the group earned redemption with a hard-fought 10-7 victory over Eclipse A in the tournament’s top division, the 2021-22 Gold bracket.

“We come up as a scholastic team and have great competition against these club teams,” Ithaca coach Aaron Shore said. “This is the first year for the modified that we’ve really done well, but it’s also the second year for this tournament. We recruited two kids. We needed a goalie and another defenseman, but other than that, we’re all Ithaca players. They’ve all been together since kindergarten and they play really well. They’re going to move up to the JV level next year, and I’m really going to miss them. When they play together and do well, they do great things.

“We didn’t do well last year. It was the same group of kids and they didn’t do so well because they were all seventh-graders playing against eighth-graders on these select teams,” Shore added. “We just weren’t ready, but this year, obviously we were. This is probably the biggest game these kids have had in their career. For us to come up here and play these all-star teams and win, that means a lot, and I’m sure our kids are pumped.”

“Last year, I think we only won one or two games,” said Ithaca’s Nick Cartmill, a standout for his team. “It feels good to come out on top this year. We know each other’s game really well, we moved the ball well, had a good offensive attack, our goalie played well and our defense stayed strong.”

George Leveille, the founder of the annual Summit Lacrosse Tournament, was on hand to watch the action Wednesday. He said the second year of the youth tournament basically went off without a hitch.

“The facility gets more incredible every time we come back here each year,” Leveille said. “We lucked out a little bit with the weather kind of missing us a bit.

“Our hope is in 40 years, these kids are playing in the adult tournament in August,” he continued. “This event especially, is just not tied to lacrosse. It’s tied to letting people enjoy the destination. Much of kids here can go have fun on Main Street, take a boat ride, visit the Wild Center. Whatever it might be. This is more of a destination-vacation tournament rather than cram in as many games as you can. We like that model.”

The summer lacrosse season in Lake Placid continues July 24-27 with the Northstar Invitational, and then the 27th annual Lake Placid Summit Classic July 31 to Aug. 6.