LAKE PLACID — It will be championships galore this afternoon as seven scholastic titles and a professional league championship will be decided at the 28th annual Lake Placid Summit Lacrosse Classic.

More than 90 teams began competing Monday morning across three girls divisions and four boys divisions, many of them comprised of some of the nation’s most heralded high school recruits. Rosters in the boys and girls brackets feature standout players from as far away as Texas and California, many of them already committed to top college programs.

Three Fellowship of Christian Athletes (FCA) teams will be playing for championships today, continuing the program’s strong tradition of success at the Summit Classic. That includes a matchup against Rochester-based SweetLax in the Boys 2018-2019 Gold division. SweetLax also has multiple teams vying for titles today.

“We love coming to Lake Placid,” said Bryan Kelly, the coach of the FCA 2018 team competing at the tournament and the head coach at Calvert Hall College High School outside of Baltimore. “It’s a great tournament, and run so well. It’s a lot of fun getting to coach kids from all over the country and getting to know them. All the kids on our team are great kids. Watching them getting to know one another on and off the field is awesome. It’s an honor to coach them.”

Championship games are to be held at the North Elba Athletic Fields, with victory presentations led by Summit Lacrosse Ventures staff to follow each game. 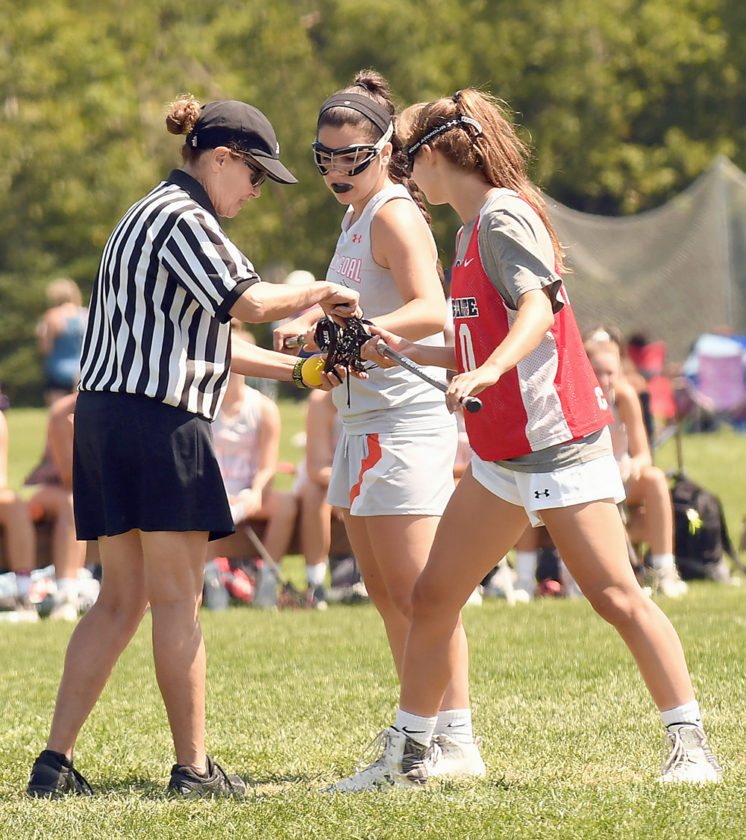 An official gets two opponents set for a faceoff during a girls game Tuesday in the Lake Placid Summit lacrosse tournament at the North Elba Athletic Fields. (Enterprise photo — Lou Reuter)

In what will be a special treat for lacrosse fans and players at the tournament, the Summit Classic is set to play host to this year’s championship of the United Women’s Lacrosse League, also known as UWLX. The Long Island Sound will take on the Boston Storm at 1 p.m. at the North Elba Athletic Fields.

Digit Murphy, the league’s co-founder and CEO, said UWLX’s goal is to help raise the visibility of the women’s game and to create role models and leaders for young girls to look up to.

“If you can see it, you can be it,” Murphy said. “We’re working to create leaders and heroes through the league and we’re excited for this chance to expose and build our brand and to expand our community.”

Setting out to create a new post-collegiate path for women’s lacrosse players, UWLX management wanted to find a different way to present this year’s championship game that was in line with its unique approach to marketing the league.

“As a startup league, you have to keep finding where the audiences are and you need to cater to them,” Murphy said. “You have to try different things and see what sticks. Summit Lacrosse Ventures does such a great job of bringing so many people together in the name of the sport, we’re hopeful to get as many as possible to attend the game. This is an amazing opportunity for us.”

The UWLX finale is presented by Coors Light and attendance is free to all.

“We want the Lake Placid Summit Classic to be a place where people can make memories and celebrate their love for lacrosse together,” said Ashley (Gersuk) Murphy, co-tournament director and Chief Executive Officer of Summit Lacrosse Ventures.

“The UWLX championship adds to an already-busy day of lacrosse that will see many of the country’s top scholastic players taking the field here. It’s another aspect of what we hope will be an unforgettable experience for our guests. The chance to help grow the women’s game and put it on display is another added bonus for this year’s tournament and the thousands of attendees.”