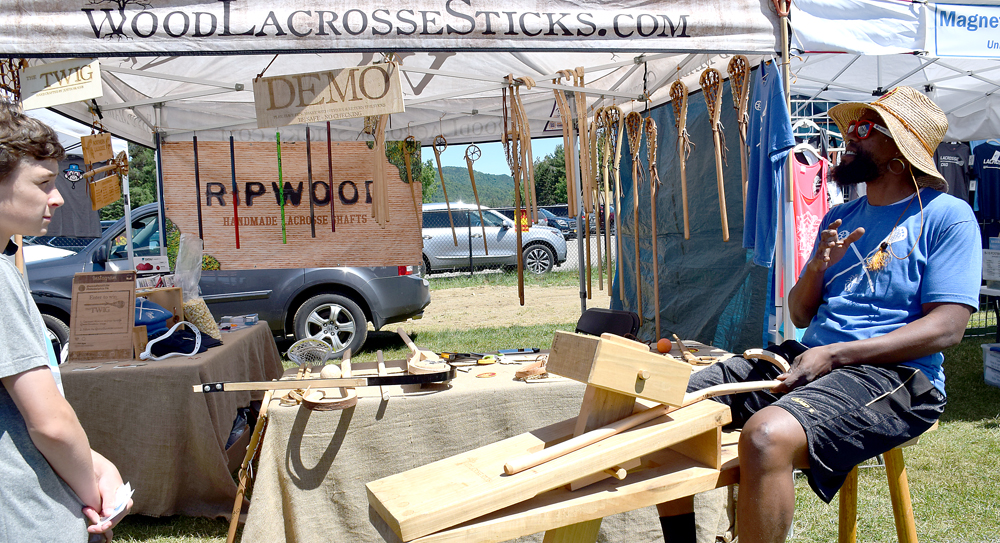 Richard Snow, of Wooden Lacrosse Sticks, sits at a traditional carving horse bench while explaining the process by which wooden lacrosse sticks are made. (Enterprise photo — Justin A. Levine)

LAKE PLACID — Lacrosse is a game steeped in history, with Native Americans inventing the forerunner several hundred years ago. But as with anything, the modern sport is full of space age technology and innovations.

There are a few companies that still make traditional lacrosse sticks, and one of them was set up at the Lake Placid Youth Summit tournament held earlier this week at the North Elba athletic fields. And while — without fail — all the players at the tournament were using modern gear, there was a steady stream of people at the wooden stick table, with kids tossing the ball around with leather, rawhide and hickory sticks.

Richard Snow, of Wooden Lacrosse Sticks, which is based in Philadelphia, said most of their business is online. The company makes its own sticks and also carries those made by other artisans.

“We find all the traditional artists in the area and try to make it a collaboration,”Snow said. “So a one-stop shop basically.”

Snow said his company carries various styles of lacrosse sticks from four different makers, but added they are constantly on the lookout for other stick makers.

A sampling of lacrosse sticks made by different Native American tribes is seen on a table set up by Wooden Lacrosse Sticks earlier this week in the vending area at the North Elba athletic fields. (Enterprise photo — Justin A. Levine)

While most of the sticks Snow sells are used recreationally at home, he said some of the sticks are competition legal and can be used right alongside modern lacrosse gear.

“The full-size sticks are all game legal, so depending on league rules you can use those in games,”he said. “But the mini-sticks we make — they’re basically fiddlestick size — we basically make those just so kids can have a historical part of the game. They’re a lot cheaper than the full size [because] we want them to really be accessible.”

Snow added that while modern technology has obviously made improvements on lacrosse sticks, there can be an advantage to using a traditional one.

“It feels different,”he said. “You can feel the ball, you feel more connected to the game. I know it sounds cheesy, but as soon as the kids pick them up, it feels right.”

Snow explained that Native Americans, depending on where they were located, used different styles of sticks, some with small, round baskets not much larger than your fist. He said that modern lacrosse sticks are based on the Iroquois style.

He said the process of making a stick can take anywhere from two to six months, depending on the size of the stick, but most of that is letting the wood dry completely. The actual labor time that goes in is closer to 10 hours.

Snow said all the sticks start out as the core of a hickory tree. Once the wood is selected and lathed down to a rough size, it is put into a steamer which allows the wood to be bent into shape. Modern lacrosse stick baskets, which are made of plastic or something similar, are connected on both sides to the shaft. But the wooden sticks, which are just one piece of wood, are shaped more like a hook, with one side of the basket not connected back to the shaft.

Makers use a heavy-duty form and put the steamed wood into it and then clamp it into shape. Snow said this is where the serious time delay in manufacturing occurs, as sticks are left in the mold for months as they are allowed to dry.

Once dry, Snow and his ilk use a carving horse and draw knife to further shape the stick before sanding and finishing it. But that’s only about half the work, since at this point it’s nothing more than an oddly-shaped cane.

The basket is then made from leather and rawhide, and a little bit of boot lace. While the leather and boot lace need to be woven, the real work for the basket is in the rawhide, which is also shaped by hand on a jig. The rawhide is used to connect the end of the curved part of the stick to the shaft, making the basket — and stick — complete.

The sticks were irresistible to kids, many of whom set down their modern sticks to toss a small ball with Native American sticks. The kids may not use the wooden sticks in games that often, but their smiles in front of the tent showed why lacrosse has remained popular for something like 300 years.